Tabby refers to a coat pattern in cats which consists of dark swirls, stripes, spots superimposed on a lighter background of ticked (banded fur).

The banded background (ground colour) consists of hairs which are more than one colour along the hair shaft and is termed agouti. This is caused by the transient inhibition of pigment production during, the hair’s growth. 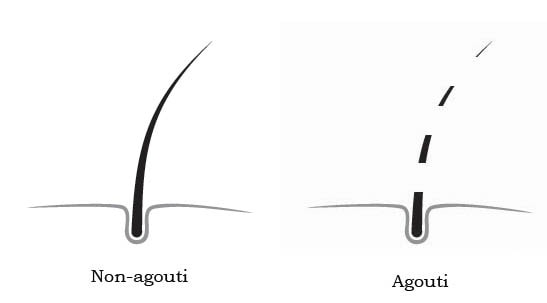 Three possible outcomes dictate if the coat will be tabby or not, remembering that the cat receives a copy of each gene from the mother and the father.

The tabby pattern is common in random-bred cats as well as many pure breeds. All domestic cats were once tabby, mutations lead to some cats appearing solid, bi-colour or pointed. Even cats with no tabby stripes have tabby genes but do not show the pattern on the fur. Some young cats with solid coat colours will display faint ghost tabby patterns until their fur becomes fully pigmented.

The basic wild-type tabby is a mackerel (Tm); however, two mutations have arisen, the dominant ticked tabby (Ta) and the recessive classic tabby (tb).

Genes are contained within the chromosome which is made up a double-strand helix containing DNA. DNA contains the instructions necessary for the cat to develop, survive and reproduce. For this to occur, the DNA has to be converted into messages which can be used to produce proteins, that are complex molecules that do most of the work within the cat’s body.

A locus (plural loci) is the specific, fixed position on a chromosome where a particular gene or genetic marker is located.

Alleles are variants of the same gene, for example, B (black), b (chocolate) and b1 (cinnamon). 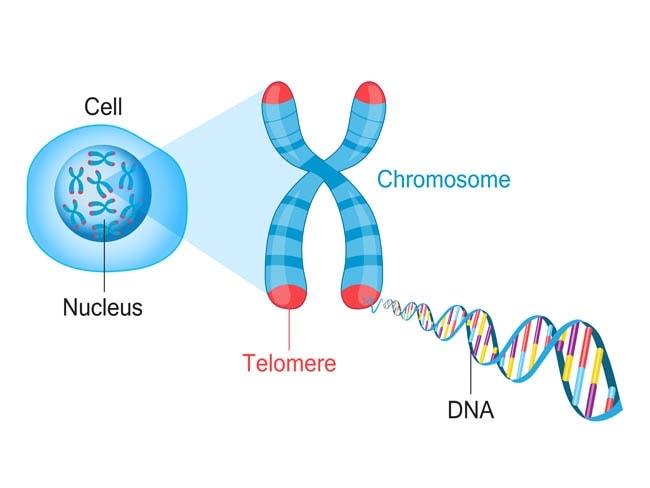 The tabby coat occurs in many colours, primarily silver, brown and red (ginger/yellow). But a dilution can change those primary colours into lighter forms.

Melanocytes are cells responsible for producing melanin, which are microscopic granules occurring in the hair, skin, and iris of the eyes. The size, shape and arrangement of melanin granules are responsible for the colour of the cat’s coat. Cats have two types of melanin, black-based eumelanin and orange-based pheomelanin. Eumelanin are spherical and absorb almost all light, which gives black pigmentation, pheomelanin granules are elongated and produce the red coat colour.

The black gene has three alleles which control the density of eumelanin in the hair shaft.

Red based colours have two alleles which are located on the X chromosome. 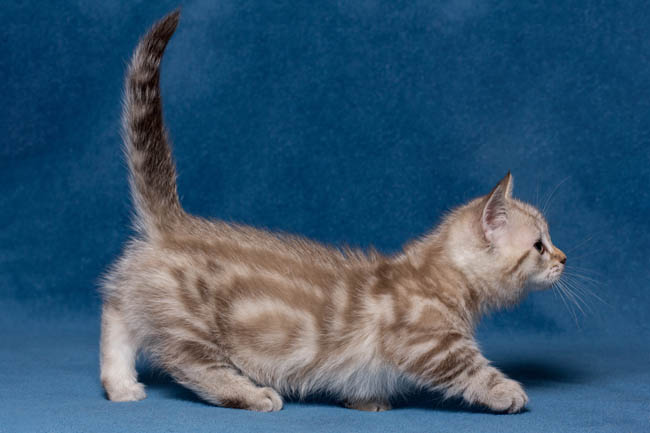 A secondary type of dilution known as dilute modifier can also occur, which causes the coat to take on a brownish cast. The dilute modifier only affects dilute colours and has no effect on dense colours. 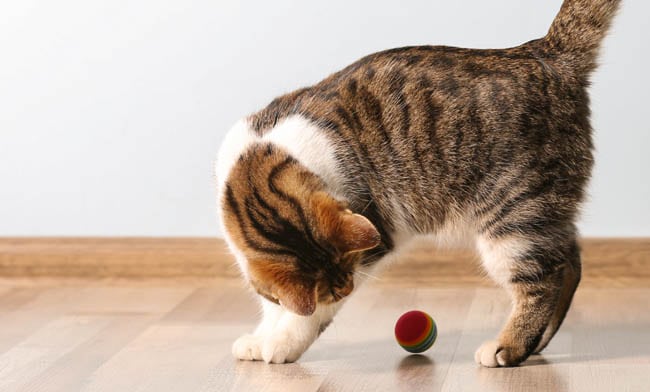 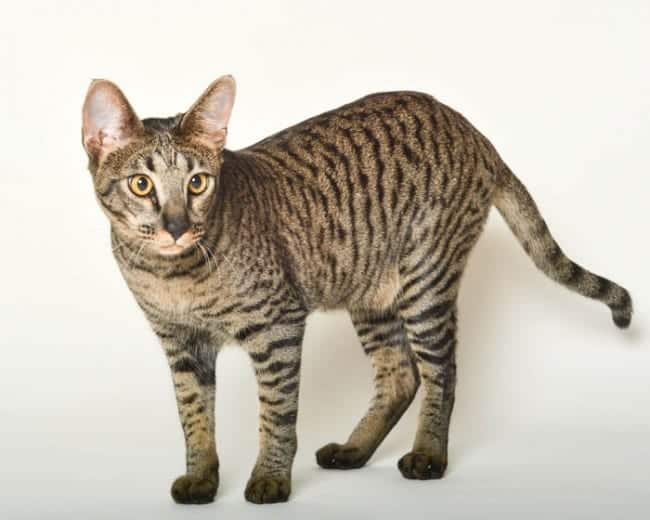 Also known as striped, the mackerel tabby pattern is the dominant wild-type which consists of well-defined, evenly spaced thin vertical stripes on the sides of the body which extend from the shoulder to the tail, and a paler ground colour. 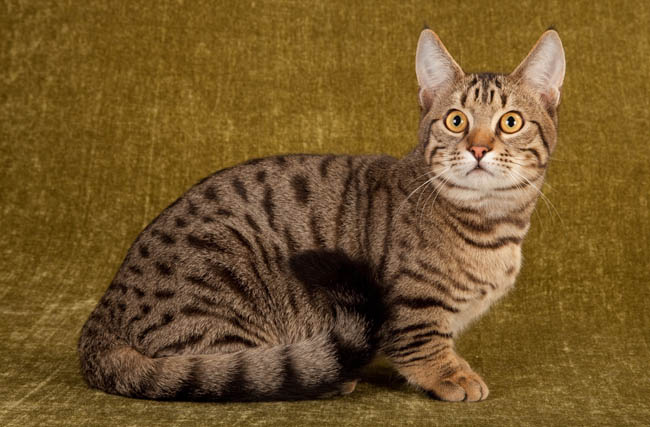 The spotted coat is a variant of the mackerel tabby however a modifier gene breaks the characteristic mackerel stripes up into spots. 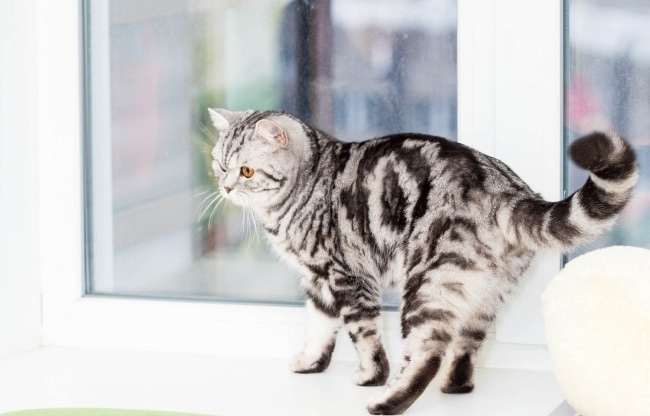 Also known as blotched or marbled, the classic tabby coat pattern consists of dark whorls on a lighter background. The ideal classic tabby will have a bullseye or oyster mark on each flank. The classic tabby is recessive to the mackerel tabby.

When viewed from above, the shoulders of a classic tabby have the appearance of a butterfly, and the classic is sometimes referred to as a butterfly tabby. 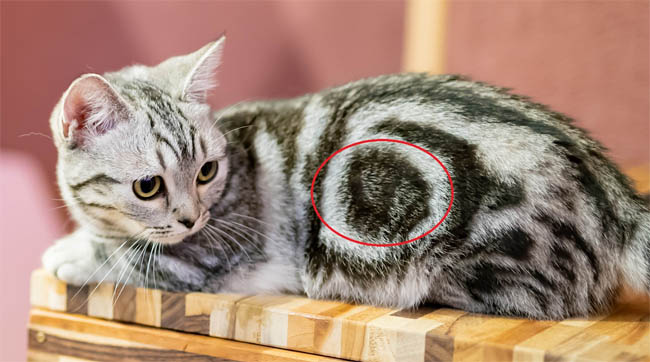 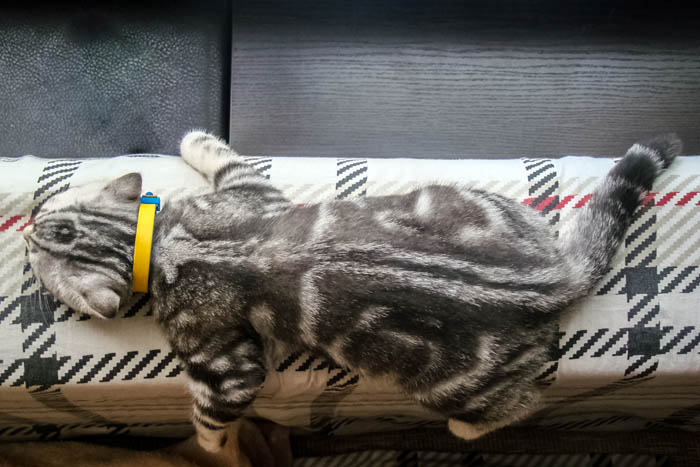 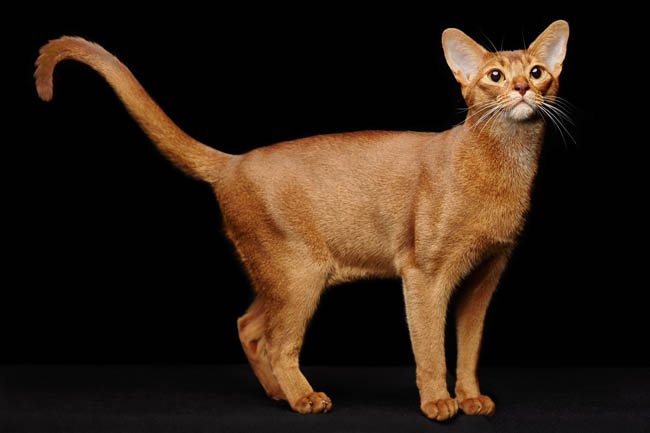 Also known as Abyssinian tabby, the ticked tabby has a gene which hides the tabby striping, leaving only the underlying agouti colouration. There is little to no striping on the body, but some faint fine barring may be present on the face, legs and tail, this may be more apparent if the cat is heterozygous, meaning its genetic makeup is Ta/Tm or Ta/tb 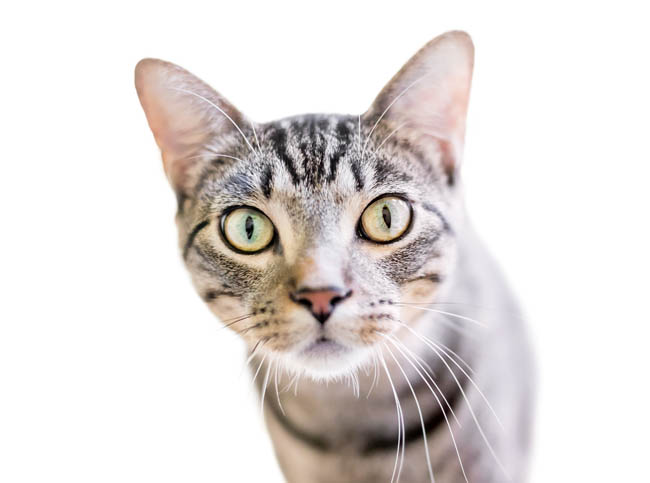 All tabby cats, regardless of pattern or colour, have a characteristic M on their forehead and most will have additional lines around the eyes. The ticked Singapura has cheetah lines, which extend down the face from the inner corner of the eyes.

What cat breeds can have the tabby coat pattern?

Do tabby cats have striped skin?

Tabby cats do not have striped skin, interestingly, tigers do.

Are tabby cats a breed?

Tabby is a pattern and not a breed of cat.

Is the tabby gene dominant?

The tabby pattern is dominant over solid.

Are tabby cats male or female?

The tabby pattern can be found on both male and female cats, however, the ratio of ginger males to females is 3 -1. That is because the female must inherit the red gene from both mother and father for her to be ginger, if she inherits one red gene and one black gene (or brown), she will be tortoiseshell. Some females also carry the white spotting gene, which will make her a calico or a torbi. Tortoiseshell and calico cats have a solid colour (usually black), intermingled with red, others show both brown tabby and red tabby.

Why does the female have two tabby colours but not the male?

The female inherits a copy the red gene located on the X chromosome from one parent and a non-red gene from the other parent. X-inactivation or lyonization occurs during early development (around the eight-cell stage, but it can occur later) to prevent the expression of both X chromosomes. Every cell in the female has one active and one silenced X chromosome (known as a Barr body), and as the cells continue to divide, they will take the colour from those eight progenitor cells. The earlier the inactivation, the larger the patch of fur derived from each lyonized progenitor cell. 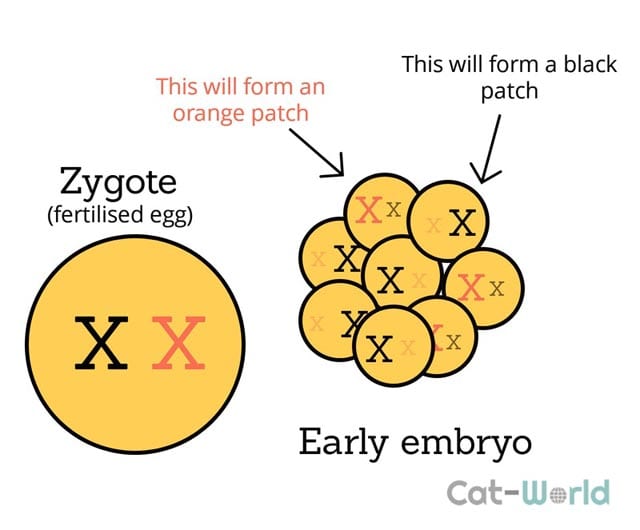 Below is a photo of a calico cat, you can clearly see the brown and red tabby colours as well as the effects of the white spotting gene. Tortoiseshell and calico are rare in male cats because they only have one X chromosome, so they will either be ginger or non-ginger. Occasionally a male will be calico or tortoiseshell, the incidence is reported to be 1 in 3,000, these males are almost always infertile. 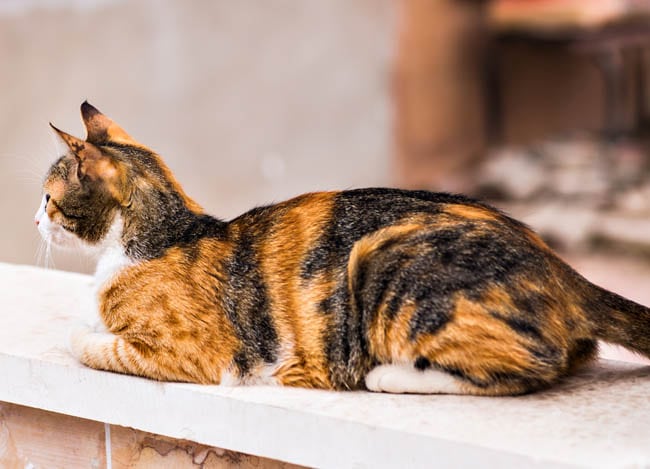