Blastomycosis is a systemic infection caused by the dimorphic microfungus Blastomyces dermatitidis, which is present in moist soil and areas of thick decaying matter such as river banks, lakes, swamps, forests, and woods. It is most prevalent in the mid-Atlantic, north-central and Ohio-Mississippi river valley areas. Fortunately, cats are more resistant to the disease than dogs and humans.

What is aspergillosis?   Symptoms   Diagnosis   Treatment

Aspergillosis is a disease caused by fungi of the genus Aspergillus which is present on dead leaves, compost heaps, soil and the in the air. The fungus typically affects the nasal cavity, respiratory system or digestive tract of the cat and in some cases, the spores can also trigger an allergic reaction in the cat.

Also known of as a runny nose or post nasal drip, nasal discharge is a common disorder in cats and a sign of an underlying condition. Nasal discharge may be clear (serous), grey/cloudy (mucoid), thick and green (purulent) or bloody. It can be acute or chronic and affect one or both nostrils.

What is a cruciate ligament rupture?    Symptoms    Diagnosis    Treatment    Aftercare

The cruciate ligament is a pair of ligaments which form an X shape within the knee of the hind leg. These ligaments attach the femur (thigh bone) with the tibia (shinbone), the long bones above and below the knee joint (which is known as the stifle joint in quadruped/four-footed animals).

Pneumonia is an infectious/inflammatory disorder of the lung parenchyma. The lungs are filled with thousands of tiny bronchi, which end in smaller sacs known as alveoli which contain tiny blood vessels. Oxygen is added to the blood and carbon dioxide removed via the alveoli. Pneumonia causes these alveoli to fill with pus and fluids which affect the lung’s ability to exchange gases.

What is Malassezia?   Causes     Symptoms   Diagnosis   Treatment   Is Malassezia contagious?

Malassezia pachydermatis is a common yeast which is a normal part of the flora (microenvironment) of the superficial layers of both human and animal skin.

The organism usually lives on the skin, ear canals, oral cavity and body orifices (vagina and anus) in low numbers where it usually causes no harm. In some cases, a proliferation occurs and causes disease. There are several types of Malassezia yeast,  Malassezia pachydermatis is the most common form to affect cats.  The yeast metabolises fats on the surface of the skin (lipophilic).

There are several contributing factors to this; essentially when ; tests immunological or physical mechanisms break down, yeast overgrowth can occur. As well as barriers keeping the yeast in check, environmental conditions may play a role. Most yeasts and funguses thrive in moist, humid conditions.

There is no gender or age ; tests, however, Devon Rexes and Himalayan cats appear to be over-represented. The condition is extremely common in dogs but quite rare in cats.

Commonly affected areas include the face and facial skin folds, chin, neck, ear canals (Malassezia otitis media), outer ear (Malassezia otitis externa), armpits, between the toes and claw folds. Lesions may be confined to one small spot or cover a large area of the body.

As well as symptoms of Malassezia, your cat may also have additional symptoms relating to the underlying disease which has caused Malassezia.

The yeast may also be responsible for non-responsive cases of feline acne.

As Malassezia is commonly associated with a serious underlying disease, it is important to seek veterinary treatment.

It is also necessary to determine the underlying cause, tests can include the following:

The goal of treatment is to address the underlying cause as well as reduce numbers of yeast on the skin. Most anti-fungal medications contain one of the following, miconazole, clotrimazole, thiabendazole, ketoconazole and chlorhexidine. There is concern about a growing resistance of Malassezia to azole containing medications.

If the underlying cause is not treated, Malassezia is highly likely to come back.

Is Malassezia contagious to other cats or humans?

No, it is not contagious.

Please add your comments below. Yes, cats fart, in fact, all mammals fart. Farting, also known as flatulence refers to the expulsion of intestinal gases from the anus.

The unpleasant smell comes from intestinal gas which occurs when bacteria in the cat’s colon break down food. This gas build-up, known as endogenous gas is expelled via the anus.

While all cats fart, but excessive farting has an underlying cause which will need to be investigated.

Read moreDo Cats Fart? All About Flatulence in Cats

The pupil is the black slit/circular shape in the middle of the cat’s iris (the coloured part of the eye). Pupils control the amount of light which enters the eye by dilating (becoming large) and constricting (becoming small/slit-like).

Both pupils should be equal in size, and when looked at with a bright light, they should both constrict quickly. 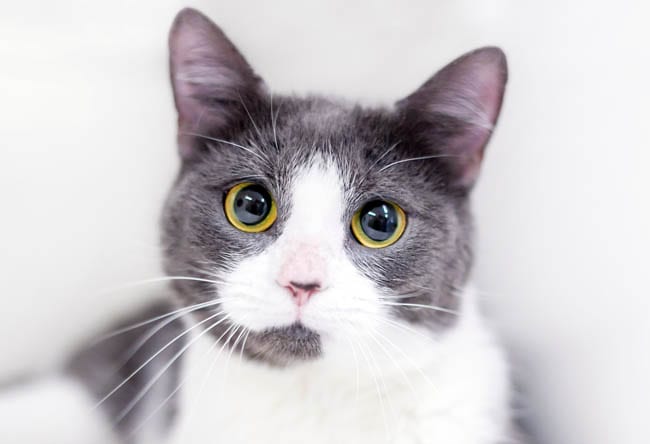 A rare condition first discovered in 1982 caused by a dysfunction of the autonomic nervous system. This system controls parts of the body not consciously operated such as heartbeat, digestive system, and pupillary response. Young cats under three years old are most commonly affected. The cause is unknown, although some suggest that Clostridium botulinum (botulism) may be a cause.

There is no cure for this condition, and the goal of treatment is to manage symptoms which may include:

A tumour of the beta cells of the pancreas that produces excessive amounts of insulin, leading to low blood sugar (hypoglycemia) which causes neurological problems and weakness.

If possible, surgical removal of the tumour otherwise, medical management such as steroids to promote the formation of glucose and dietary management.

Brain tumours are an abnormal growth of cells which can be benign or malignant and account for 2.2% of all tumours in cats. They can be primary, originating in the brain or its membranes, or secondary, having originated elsewhere. Approximately 70% of brain tumours are primary. There are many types of brain tumours, depending on the cells involved, the most common type of brain tumour in cats is a meningioma, a benign tumour that arises from the meninges, which is the membrane that surrounds the brain and spinal cord.

Can vary on the type of brain tumour as well as its location within the brain, but may include:

Retinal detachment (RD) is a common, serious and sight-threatening disorder which occurs when the retina (a thin, transparent layer of light-sensitive tissue which lines the rear of the eye) detaches from the underlying retinal pigment epithelium layer. High blood pressure is the most common cause of retinal detachment, and hyperthyroidism (a benign tumour of the thyroid gland) is a leading cause of high blood pressure. Kidney disease (the kidneys regulate blood pressure by releasing the enzyme renin, which constricts (tightens) blood vessels, increasing blood pressure.

Hyperviscosity syndrome (HVS) in which causes the blood to become thicker than usual due to increased proteins (hyperproteinemia), most often associated with multiple myeloma which can lead to ruptures in the small blood vessels behind the retina.

The goal of treatment is to address the underlying cause, which may include:

Any head trauma can potentially damage the brain and affect the autonomic nervous system, which as we noted above, is responsible for specific functions cat has no direct control over such as heartbeat, digestive system, and pupillary response. A fall from a height, trauma from a car accident or intentional hit to the head can all potentially cause injury to the brain.

Treatment depends on the severity of the trauma; it will require hospitalisation and supportive care, including fluid therapy, oxygen therapy, medications to control seizures and in some cases, surgery. 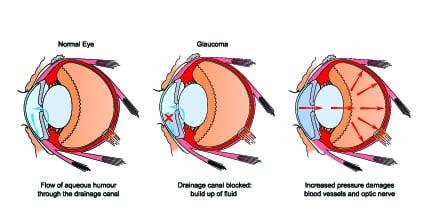 An increase of pressure within the eye (intraocular pressure) which can damage the optic nerve, connecting the brain to the eye. The most common cause is a blockage to the drainage system within the eye, leading to a build-up of fluid, which may be due to inflammation or infection, trauma, displacement of the lens, cataract surgery or tumours.

Glaucoma is a sneaky disease and often has few signs until irreversible damage has occurred.

Acute or chronic kidney disease: Damage to kidneys cause a decrease in their ability to filter the blood and remove toxins (via the urine). Kidney disease affects blood calcium in two ways.

Milk fever: This condition occurs in female cats who are nursing kittens.

The goal of treatment is to find and manage the underlying cause as well as treat symptoms of hypocalcemia.

Thiamine (B1) is a water-soluble vitamin which plays a vital role in many bodily functions including metabolising carbohydrates, maintaining a healthy heart and nervous system. Thiamine deficiency is rare in cats and is usually associated with those who eat a home-made diet which is either cooked in water or heat (both of which destroy thiamine) or a diet high in fish.

Venom is a form of poison secreted by several animals in defence or to kill their prey. Snakes, scorpions, spiders, and ticks are all common sources of venom toxicity in cats.

Venom affects several body systems, including the blood, nervous system and heart and symptoms can vary depending on the type and amount of venom

Where possible, administer antivenom which counteracts the effects of the venom. Intense supportive care is essential and may include oxygen therapy, intravenous fluids, anti-nausea medication and nutritional support.

Drugs or plants with anticholinergic effects are substances which block acetylcholine from binding to its receptors on certain nerve cells, inhibiting parasympathetic nerve impulses. These nerve impulses are part of the autonomic nervous system responsible for several functions not consciously controlled, which includes pupil dilation and constriction). Several prescription and over the counter drugs in the following classes have anticholinergic effects, which include:

Plants with anticholinergic properties include:

Gastrointestinal decontamination if ingestion is recent followed by activated charcoal to bind to any remaining toxins in the gastrointestinal tract.

The antidote for anticholinergic toxicity is Physostigmine, which works by increasing extracellular levels of the neurotransmitter acetylcholine, which counteracts the effects of the anticholinergics.

Your veterinarian will perform a complete physical examination and may need to perform some diagnostic tests to determine the cause.

He will carefully examine the eyes and obtain a medical history from you.

What should you do?

If you notice your cat has dilated pupils, move him to a source of light, or shine a torch in the eyes to see if they constrict (go smaller). If there is no change, despite exposure to light, consult your veterinarian.

What is Lyme disease?

yme disease is a tick-borne disease that affects humans, dogs, cats and other mammals. It is caused by a bacteria known as Borrelia burgdorferi. Infection occurs via the bite of a tick, which carries the bacteria.